In my preparations for the Tahoe Rim Trail 100 on July 18, I was supposed to run 35 miles on Sunday, wrapping up an 80 mile week- my biggest week in the training cycle. Gretchen agreed to join me, and we planned to run on the TRT course. However, the day before I came down with a bad case of pink eye – so we had to change plans, as we couldn’t ride in the same car together, or risk making any contact.

We decided to do a loop from Gretchen’s house instead – we could meet outside, and run together, hopefully without me contaminating her. We had each previously done a similar version of this run, Gretchen wrote a great post about it in 2011. I was grateful for 1) her wanting to run 35 miles with me 2) being totally flexible with changing the plans and 3) not being afraid of being around someone contagious. All characteristics of a true friend.

We headed North out of the Armstrong Tract towards Tahoe Donner, to catch that trail system up to the Donner Lake Rim Trail. We paused at the overlook to 1) enjoy the view 2) check our friends’ status who were still on the course at Western States 100.

climbing up the Tahoe Donner Trails

Gretchen on ultralive checking the stats at Western States

The turnoff to the DLRT

As we descended into Negro Canyon, we were treated to a hillside covered in pretty manzanita. The only time I have ever found manzanita to be “pretty”. It even smelled good.

We followed the trail about 1/2 way down the canyon, until the right turn to head up towards Summit Lake. We were surrounded by a mixture of lush ferns, wildflowers, the buzz of happy bees, birdsongs, and butterflies as we made our way up to Summit Lake.

the trail down through Negro Canyon

We made our way to the Pacific Crest Trail, with a stop at the rest area off of I-80, at mile 13, to refill water (and clean my eye and scrub with soap). Continuing South on the PCT towards Hwy 40 (“Area 60”, as a friend calls this (in between 40 and 80), we came across many thru hikers and day hikers alike. We had both forgotten how busy this trail gets in the summer. 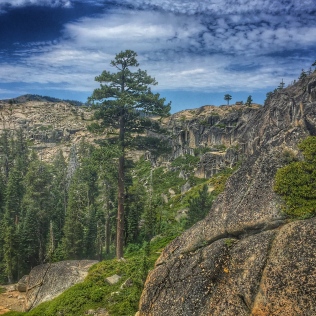 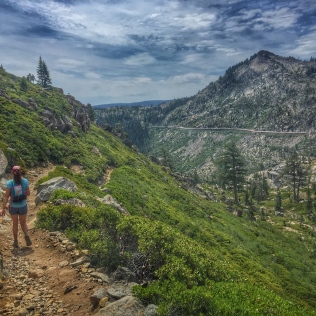 Gretchen heading down the PCT towards Donner Pass

We stopped at Hwy 40 (mile 18) to top off our water, as this next stretch on the PCT to Coldstream Canyon would be about 15 miles before hitting water again. We made our way up the PCT towards Anderson Peak, and were blown away by the wildflowers. We seemed to have hit this at the perfect time. In the week leading up to this day, I felt like I “had” to run on the TRT course for this long run, but I completely changed my mind when I was reminded of how incredible the trails were, literally, right out our door (or out Gretchen’s door- I live about 5 miles away).

We paused a couple times along this high ridge to look back at how far we had come. That is one of the best parts about this loop- you can see, from many vantage points, where you have been or where you are headed. And it looks really, really far away.

just below Mt. Lincoln, on the PCT

pausing to get a snack and take in the view 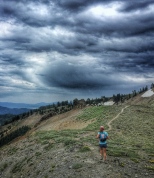 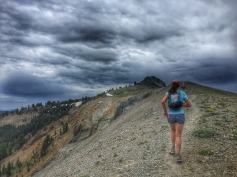 the climb to Tinker Knob

At Tinker Knob, we stopped to talk to a thru hiker, and had fun watching his reaction to describing the food he could find in Truckee. Gretchen thru-hiked the entire PCT years ago, and said she forgot how excited you get at the prospect of “real food”. I said I feel that way every time I run… 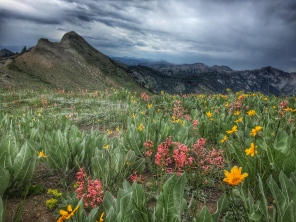 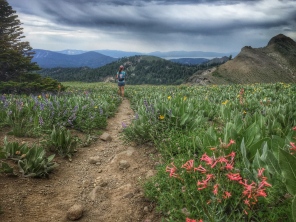 Gretchen on the PCT 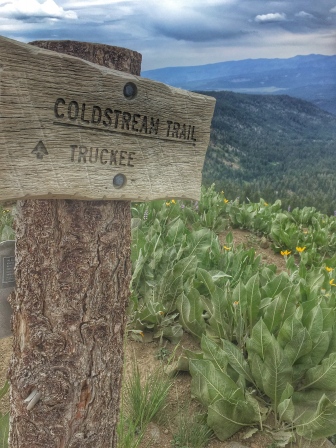 our left turn down to Truckee

We reached the left turn down to Truckee at mile 25. The trail down through Coldstream Canyon is steep in places, with some loose rocks that doesn’t allow for the smoothest running. We made our way down, with hopes that we would find water at the Lost Trail Lodge. We started feeling raindrops on the descent, and even though I should be getting heat training in, I was grateful for the drop in temperatures and the gentle rain.

We reached the beautiful Lost Trail Lodge and to our relief, the water was on, and nice and cold. The last miles through Coldstream were fairly flat and runnable, and we cruised along pretty easily, ready for the run to be over. The road seemed never-ending, but when it did, we were dumped out into civilization again and the cars, freeway, and pavement were a bit shocking after spending most of the day in the tranquility of the trail.

The final 1.5 miles up to Gretchen’s house was a climb, runnable, with the rain coming down more consistently now. It was the absolute perfect way to conclude our day.

When we reached the car, I realized that both eyes now had pink eye- joy. Gretchen and I typically hug at the end of a run but today was an air-high-five. “make sure you scrub your hands just in case”.