Originally registered for the TRT100 miler, which would have been my 2nd go at the course, I decided Memorial Day that I was simply not up for it, in training or my emotional state. This past two weeks have been a struggle with trying to decide whether or not I should can the whole thing, due to lack of consistency in training, various injuries, and just a whole lot of personal drama. So my expectations going into this were not very high – the primary goal was to finish.

After about 6 unsuccessful attempts to go to the bathroom, the national anthem was played (while I was still in the porta pottie), and I made it out in time to start the run. I didn’t have much of a strategy going into the race, aside from a spoken goal time of 12 hours. I felt like that was a very safe and attainable goal, and anything better than that would be a bonus.

The run begins at Spooner lake and climbs up to Marlette Lake. My pace was averaging around 12:00 per mile and I was quite content with that, as a 12 hour finish would be a 14:00 per mile pace. It was around mile 5 that I thought, “I’m so glad I am not doing the 100 this year”, which turned out to be a recurring theme throughout.

From Marlette Lake, we climbed up to Marlette Peak, which offers stunning views of Marlette Lake with Lake Tahoe in the background.

After Marlette Peak, we hit a very runnable section leading down to the Hobart Aid Station and the start of the dreaded Red House Loop (which I don’t find so dreadful personally). I caught up with JP and Gretchen (eventual female 50k champion!), and we enjoyed several miles running together.

I was wearing a hydration pack (new race strategy for me, no handheld water bottles to minimize time at the aid stations), so I didn’t actually stop at any aid station until about Mile 18, to refill the pack. This is where the 50 mile runners continue on towards Diamond Peak, and it was about this point that I started getting more focused on my strategy. I decided that a 10 hour finish was possible, if I planned the pace accordingly. I worked on getting my pace down to 11:30 per mile by the time I hit the 30 mile mark, at Diamond Peak Lodge,

so that I had a bit of a cushion for the brutal climb up Diamond Peak.

This was the hottest part of the day, but a bra full of ice and a bandana with ice to wipe down my face (Thanks Betsy!) saved me and by the time I reached the top, I was just over 12 min/mile, still within my new found goal pace. I actually enjoyed the climb up Diamond Peak, I ran into a few friends AND was super stoked to only be doing this climb ONCE for the day (unlike the 100 milers).

At about mile 35, thunder could be heard in the distance and some ominous storm clouds had begun to form. 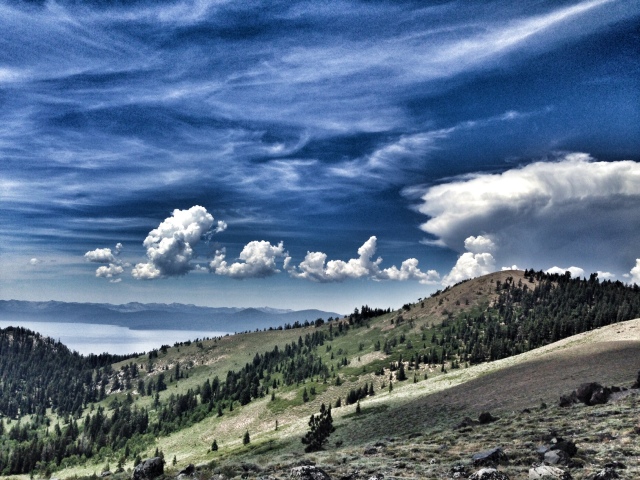 At the pre-race briefing, the race director warned us that afternoon thunderstorms were forecasted, and if lightning became an issue, they would evacuate the aid station at Snow Valley Peak (mile 43).

Fortunately for me, the timing of the clouds and gentle breeze were perfect, and I was able to run fairly strong up to Snow Valley Peak Aid Station, where I arrived at just over 12 min/mile average pace. Now I really wanted to break 10 hours, and I knew it was attainable.

As I started the fast descent down from Snow Valley Peak, a fairly sharp [new] pain began in my right ankle. The thought crossed my mind that this could be a game changer, but I decided to pop a couple more ibuprofen (now my 8th for the day) and put it in high gear. I knew it was risky, as I could be forced to walk, but I took my chances that this would resolve itself and I raced down towards Spooner Lake and the eventual finish line.

With the aid of some fast music (my first for the day, at mile 46), the pain was eased, and I cruised pretty effortlessly (sub 8-min miles) down the L-O-N-G singletrack toward Spooner. When I reached the final aid statio n at about Mile 49, I spotted another female 50 mile runner about 100 yards ahead of me, and had a new goal of catching her. This was the first time of the day that I actually thought about anyone else doing the 50 mile (there were 55k, 50 miler, and 100 mile runners all on the course together, so it was nearly impossible to have any idea of your standing). She saw me at the same time, and it became a real race. I caught her in the aspens before the first view of Spooner Lake, and was able to eventually beat her by about 3 minutes.

After the race, we met up with friends who were crewing for Helen’s 100 miler. Just as we were about to leave, it started to rain, which quickly turned into thunder, lightning, torrential downpour, and hail. I couldn’t stop thinking how glad I was to not be running the 100…

Nutrition, etc: I drank an electrolyte mix and had a cliff shot every hour. No solid foods aside from a small, delicious rice cake that a friend gave me at Diamond Peak (mile 30). 8 ibuprofen and about 6 bathroom stops, but no serious stomach issues.