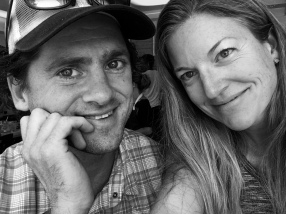 2:00pm Saturday afternoon, September 9, 2017, Lucas and I sat at the Bread and Butter Bakery in San Anselmo, looking at gaia maps on his phone and figuring out our running route for my birthday run- matching miles for years, to celebrate my upcoming bday on 9/12.

The goal was 39 miles. We’d both heard about Devon Yanko’s (an elite ultrarunner) bakery, and Lucas’s idea was to have brunch here then run to the beach and back.

We ordered a Tam Fog drink (lapsang souchang tea, steamed milk, golden syrup, and lemon twist), a beer (St. Bonita Rustic Lager), a fried egg sandwich (with 2 yr. cheddar, bacon, avocado, and roasted tomato basil aioli), and creamy polenta (salsa verde, poached eggs, sheep feta, and cilantro). The food was INCREDIBLE, and the sandwich was so big I got to take half of it to go, for what we thought might be a “midnight snack” later in the run. 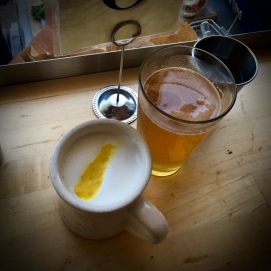 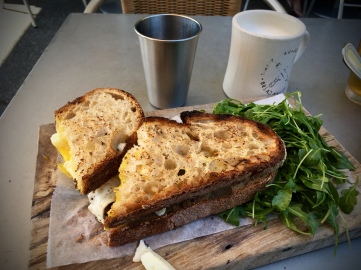 the most amazing egg-bacon-avocado-cheese sandwich + arugula

We parked a couple blocks from the bakery to avoid the 2-hour parking issue, and headed up towards Oak Avenue. 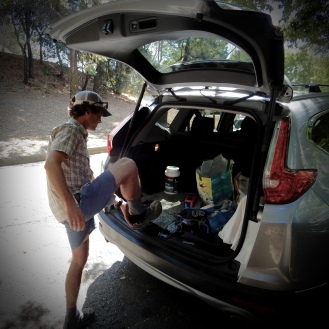 As we passed a seminary, hauntingly beautiful piano music drifted out the open windows. The sign on the lawn said “no dogs on grass” but the bark coming from inside as we ran by the door indicated dogs WERE allowed in the church.

After climbing Oak Avenue, the residential street turned into a fire road, which then led to the series of trails and fire roads in the Bald Hill Open Space Preserve that we meandered through to the Mt. Tamalpais Watershed.

The trails and fire roads were well-marked and this combined with Lucas’s route-finding on Gaia left little room for error. It was the hottest part of the day, and the heat radiated off the dry earth.

We met a couple at an impeccably clean porta-pottie 5 miles in, near the Rocky Ridge Fire rd and chatted for a bit. Lucas asked how we should get to Bolinas, and the guy responded “start about 6 hours earlier”. He laughed and gave us some suggested trails to hit along the way.

From mile 6 on, I thought about significant events that occurred during each matching mile-year of my life, sharing stories with Lucas, and asked for his memories from each year as well.

After winding around the beautiful lakes/reservoirs, the trail started climbing into beautiful redwoods along the Cataract Trail. We found a gorgeous little waterfall and pool to stop and cool off in. 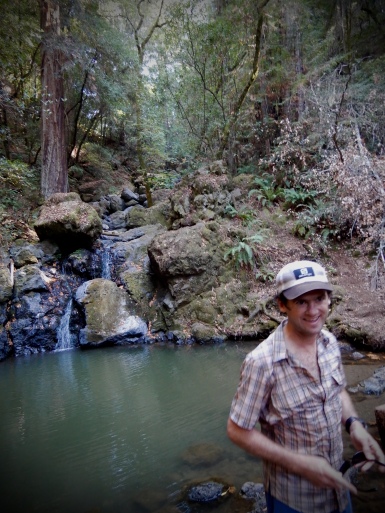 After climbing out of the redwoods, we came to a road (Ridgecrest Blvd) that we followed for a couple of miles, taking little trail detours here and there.

I pulled something in my piriformis area (recurring issue lately) around mile 14, which made mile 15 the hardest of the run, which corresponded darkly with year 15 of my life. I silently pushed through, keeping the despair to myself. I seriously doubted that I would be able to continue on for another 24 miles with this.

We hit mile 16 and Lucas commented that I’d missed some years – I told him what was going on and how glad I was to be over that horrible year and mile. My leg loosened up and miles 16-23 brought us closer to the beach and I happily recalled some of the best years of my life.

We reached the bike path leading to Bolinas, a beautiful little seaside community, as the sun began to set. 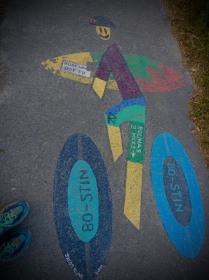 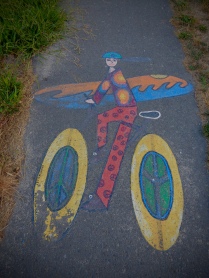 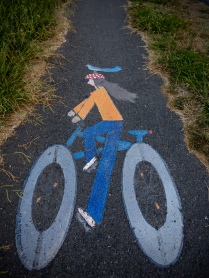 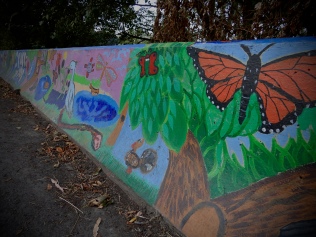 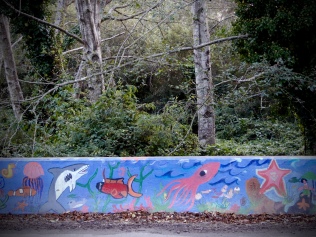 We ran through the funky and artsy little town, noting our dinner options, and decided that oysters would be amazing after we went down to the water and back.

On the way to the water, we again heard gorgeous piano music, this time coming from a sweet house built on stilts over the bay. 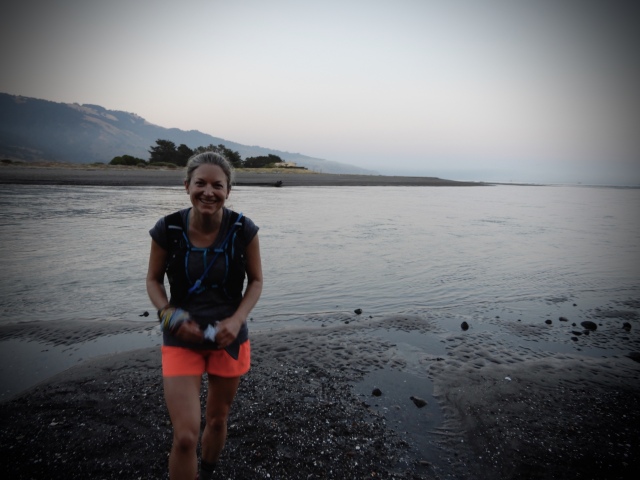 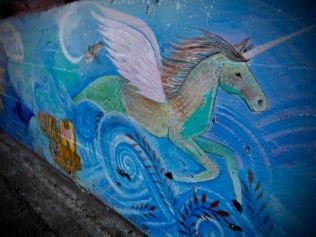 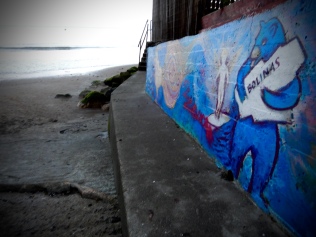 We made our way back to the little town center, and chose Eleven Wine Bar Bistro as our dinner spot. 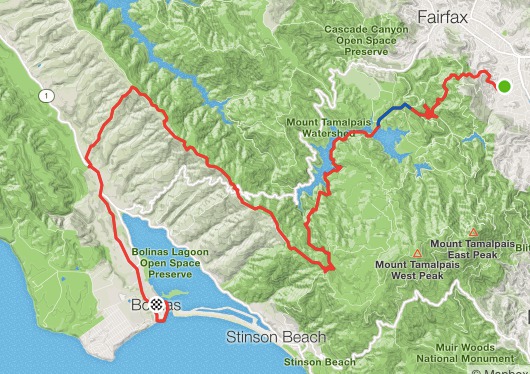 We ordered a half dozen oysters, a couple beers, and a pepperoni pizza. There were no leftovers; it was phenomenal. The best oysters ever; we both agreed.

Lucas studied Gaia and found us a return route that would cut some miles off – the goal was 39 miles but we’d be going over a bit.

On the way out of town, we found a 24-hour self-serve farmer’s market with the freshest, most beautiful produce. We purchased a melon for dessert. 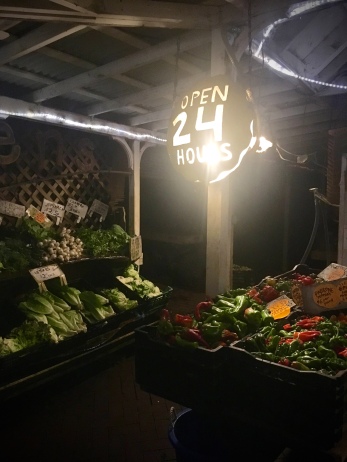 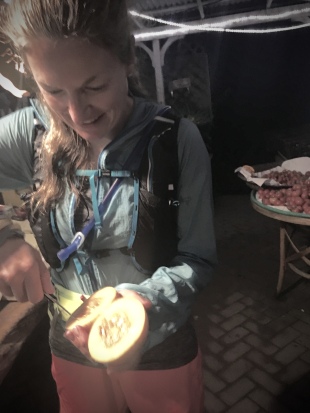 We followed a paved road, dodging cars, until we reached the Martin Griffin Preserve, where we went around the fence and crept passed the employee houses with our headlamps off. A deer (we think) bounded across the trail in front of us and scared the crap out of me.

After a bit of stumbling around, we found the Bourne trail that would take us back up towards the ridge between the ocean and Mt. Tam watershed. The further we got from the ocean, the temps rose, and it became quite hot again.

We took our time, as Lucas’s stomach seemed to be rebelling against the oysters/pizza/beer we had for dinner. We stopped for a short nap on a picnic table once we got down again from the ridge.

I had the 2nd half of my delicious egg sandwich from 10 hours earlier, around midnight in the middle of the woods. Lucas had stopped for a break, and as I stood eating my sandwich, a chorus of coyotes howled loudly in the darkness. I love being out at night.

We made it back to the streets of San Anselmo around 2am.

The return trip brought our total to just under 41 miles with 6500′ of climbing. We were out for 12 hours, which included many breaks and about an hour for dinner. 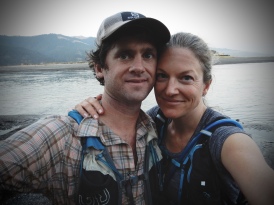 It was my favorite birthday run to date.