We are on day 2 of a 3-day winter storm, the biggest storm we’ve seen since last year… so far it looks like the predictions below are going to be accurate:

Last night, Bev the pup and I went out for a run, in the blizzard, in the dark, and it was ridiculously fun. Dressed properly, I stayed plenty warm for the entire 9.75 miles. The wind picked up here and there, but my Yooper Chook hat protected everything but my eyes. The roads were very icy under the snow, but my Kahtoola Microspikes kept me upright. 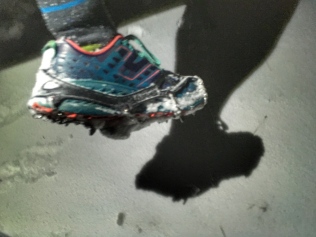 It was supposed to be a speedwork session, and I did try running at some kind of tempo for the 12 minute x 3 repeats… as fast as I could anyways, while facing the snow, wind, and ice. It wasn’t easy, but I’ve got a 50 mile race on March 10th in Marin, so I can’t just skip a run because the conditions aren’t ideal.

This morning, we awoke to a break in the storm- blue skies (that didn’t last long), fresh powder, perfect conditions to get out and explore the mostly-unplowed neighborhood.

Bev and I headed up the street towards Schaffers Mill, a neighboring hood that usually plows their streets before ours.

We saw one plow… which was good, however, every house he passed was left with an enormous berm- those people won’t be getting out for awhile.

The street leading to Schaffers Mill wasn’t plowed, but I thought it would be on the other side, so we trudged on. Bev was gasping for air and seemed a little scared in the deep, deep snow.

Ok, so Schaffers Mill was not plowed yet. We decided to go back to Thelin Drive and hope that the snowmobiles we saw earlier had cleared some kind of a path on the 06.

They did! Bev and I trudged through their tracks for awhile.

We looped back around the neighborhood and I decided I’d better make a run for it if I wanted to get out before the street was plowed and my driveway became impassable.

The drive to work was an adventure, but we made it.

Hoping for more snow… and a stronger shovel.