After the best night of sleep in a LONG time, followed by coffee and a quick breakfast, Lynette and I packed our running gear in dry bags, and walked from her place across the island to set out on our adventure.

Our goal was to beat the Ranger III before it came back from Rock Harbor to Mott, so as to avoid the wake. It worked, and we were treated to glass-calm waters. 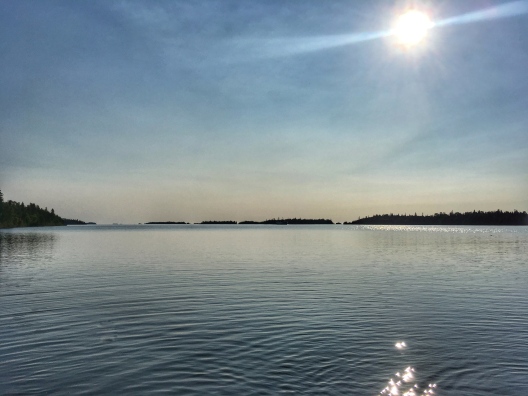 Once on the big island, we stashed the boats and transitioned into running gear.

As Lynette had warned me, nearly every backpacker we met looked stunned to see us running- they thought we were studs, and told us as much. What they didn’t realize, was how easy running was compared to what they were doing; we were carrying minimal gear- just water and a few calories, not to mention the fact that we were sleeping in real beds at night with indoor plumbing, electricity, a kitchen, and so on. But, we enjoyed the praise and didn’t correct them.

It was pretty special to have a running tour of the island with The Island Ecologist as my guide. Lynette pointed out flowers, plants, and my favorite, raspberries and thimbleberries, which we gobbled up along the way.

She also introduced me to some of the island’s carnivorous plants.

From the boat, we followed the trail along the lake about 3 miles to Daisy Farm campground (a walk-in or boat-in rustic campground), then continued up to Mt. Ojibway (1143′ above sea level), which has a fire lookout to climb (and guess who had a key?)

From Mt. Ojibway, we followed the Greenstone trail to Mt. Franklin. Along the Greenstone Trail (the 42-mile trail that crosses the entire island), Lynette pointed out a plant that is endemic to Isle Royale- it only grows in one, 8-foot long section, on this one part of the island.

From Mt. Franklin, we went down to the Three Mile Trail which eventually led us to the water.

We reached the boats in about 3 hours- our loop was 12.2 miles with 1,234′ of gain, and lots of stopping and exploring along the way.

We put the boats away and headed back to find our family.

Next up – Isle Royale Part 3 – where are the moose?